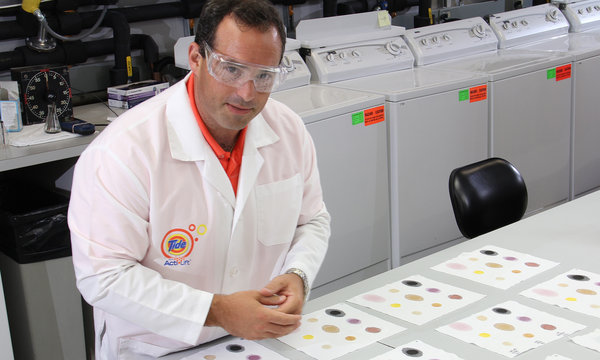 In this thinly veiled puff piece for Procter & Gamble’s Tide Coldwater, The New York Times reports that despite the efficacy and saved money/energy of cold-water washes, consumers are still hesitant to give up hot-water washes:

Procter officials said they were encouraged by company surveys that showed more consumers were washing in cold water. When Tide Coldwater was introduced in 2005, just 30 percent of laundry loads were washed in cold water; now, it’s pushing 40 percent.

“We have people moving from warm to cold,” said Dawn French, the company’s director of North America laundry products research and formula design. “But hot-water loads have remained very steady.”

Currently, about 7 percent of white laundry loads are done in cold water, compared with 22 percent for lights and 57 percent for darks, according to company studies.

Many of us do probably wash our colors in cold water, but I’ll admit I usually still do my whites in hot water. Though after reading this article I’m reminded how frivolous that likely is.

And expensive (according to the article, energy savings isn’t really a big selling point with Americans, yet).

About 90 percent of the energy used for washing clothes in an average washer is for heating the water. Switching your temperature setting from hot to warm can cut a load’s energy use in half.

It really is a no-brainer, given current technology.

One possible issue associated with only washing in cold water: smelly washers. I’m sure that cold-water detergent is formulated to fully dissolve — making residue less of an issue — but remember to keep your washer open between loads, wipe your gasket clean occasionally and run a washer cleaner through as needed.