If you’ve ever tried to clean baby bottles in your dishwasher, the game-changing-ness of GE’s latest Profile Series dishwasher needs no explanation. This is probably the best dishwasher ever. OK, maybe I’m overreacting a little, but just bear with me.

New, dedicated jets have been added into the top rack to clean dried milk from a baby bottle or, say, the spinach that gets stuck to the bottom of your smoothie jars in case you’re juicing or whatever.

No use crying over dried milk, here.

Tines on the upper rack are topped with a blue node that sprays water up into its hard-to-reach area. You load the bottle or other tall, narrow opening cylinder on top of the tines and the water will directly spray into the bottom of the containers.

Or if I’m to explain it in another way:

But why stop there?

For those of you keeping score at home, GE touts 54 percent more cleaning jets than any other dishwasher in the industry – 102, total.

Not only is that a big number, but the wash arms reverse and vary speed to ensure better coverage. It’s also a really good way to confuse the mess left on the plate: just when it thinks you’re coming at it one way…BAM! REVERSING JET! 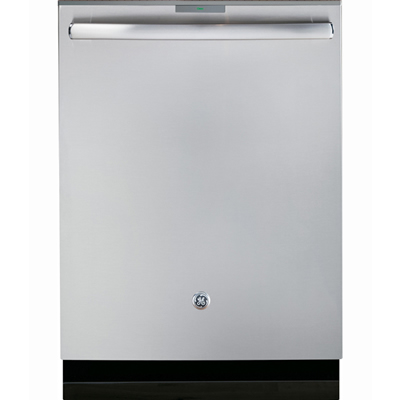 Sleek stainless and hidden controls, because it’s modest like that.