My grandpa Jim Warner used to joke that Warners’ Stellian, which he started, had 203 employees — and only three of them weren’t related to us.

He exaggerated for effect, of course, but the underlying message that ours is truly a family business can’t be overstated.

Sure, we employ a lot of family  (currently about 30 of us out of around 200 employees), but family business means more than just working with other Warners — it means creating and maintaining a legacy of family values through our business. 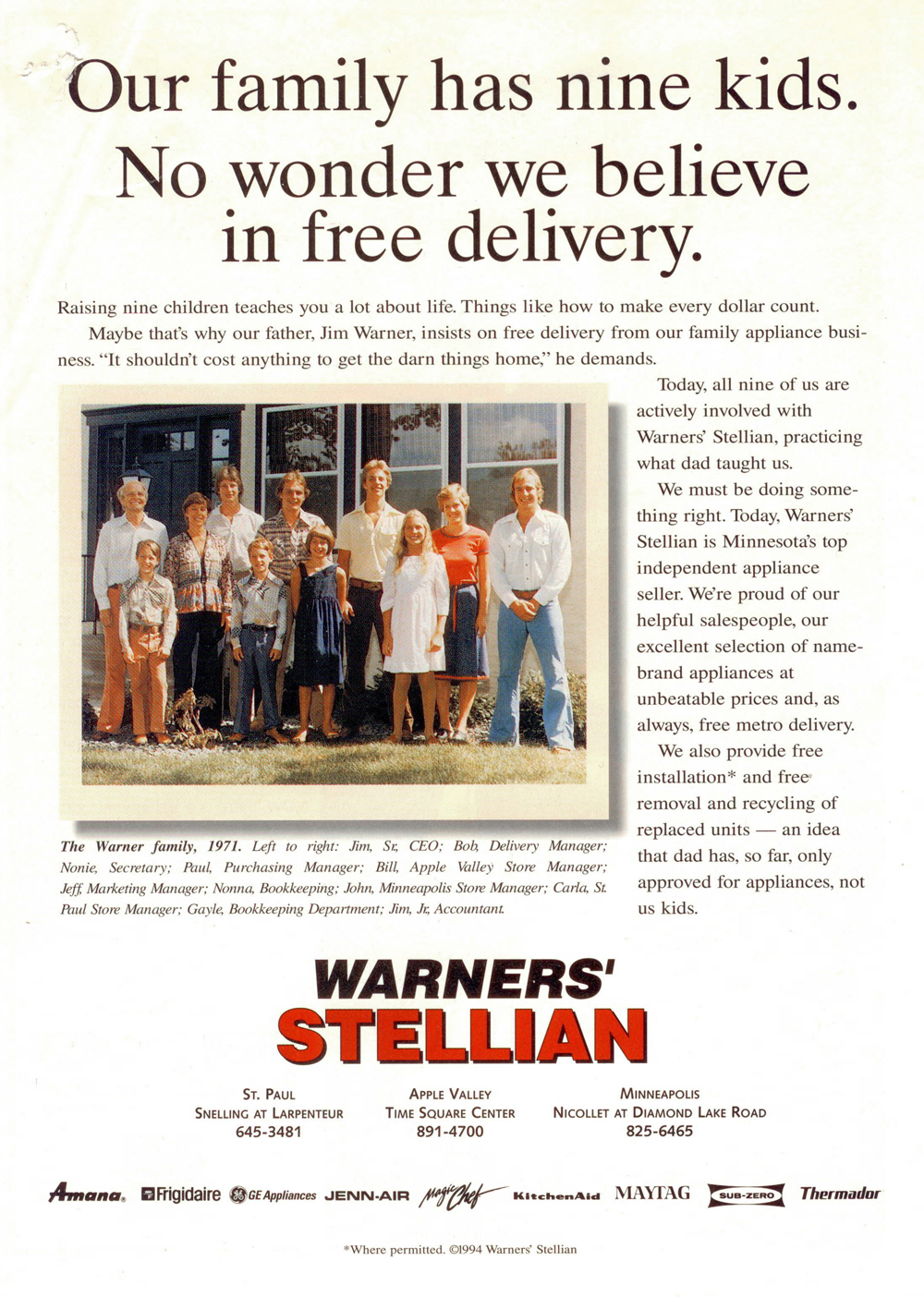 “We want to perpetuate the family values our father, Jim Warner, has taught us through his own life: humility, integrity, gratitude and compassion,” said Jeff Warner, president. “Our dad’s values have brought us success both as a family and as a business.” 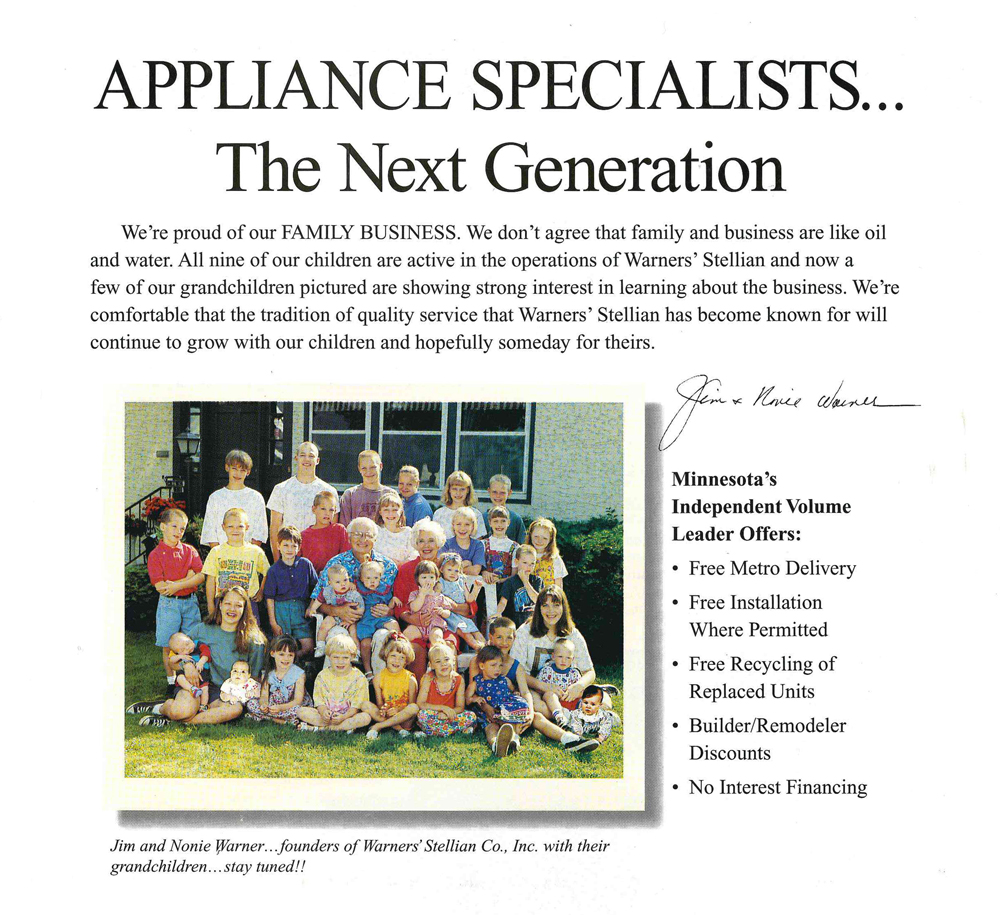 I love this ad. Jim & Nonie Warner took this picture with us grandchildren, the third generation of Warners’ Stellian — of whom 11 work here full-time — minus about six or seven that came after this picture. Bet you can’t spot me!

We are extremely honored to be recognized as outstanding among the state’s family businesses, which bring so much value to our economy and communities. In fact, Gov. Tim Pawlenty just declared October to be Family Business Awareness Month.

In the proclamation, he recognized family businesses as “critical to the success of our state and national economy” and their ability to “enhance our communities by providing stable, trustworthy services.”

Thanks to Minnesota Family Business Awards for the honor, to our customers for making us successful and, especially, to my grandpa and grandma for creating such a wonderful family legacy.

Many of our longtime employees still refer to our Customer Appreciation Sale as its predecessor, the Private Sale.

(Background: My grandpa, Jim Warner, began at Stellian Appliance on Snelling and Larpenteur avenues in 1954 , but surprisingly, not in sales – where those who know him would expect.

“One day they said to me, Jim you’re a good bookkeeper, but you’re an HS salesman [HS stands for something meaning bad, we’ll just say that],” my grandpa said.

After being challenged, My grandpa said that challenge started him selling and went on to become a great salesman. Those that work at Warners’ Stellian on Snelling and Larpenteur still get his former customers in saying so. (I know I used to hear some pretty funny stories myself.)

The Private Sale literally closed down the store. Don’t get me wrong, the once-a-year, one-day-only sale attracted 600-700 people, but because the prices were so unusually low, customers were only admitted by a letter sent by Warners’ Stellian. Lockdown, letterholder-only.

My grandma and grandpa recall the days spent manually weeding out the duplicates (Steve Anderson/Steven Anderson, etc.) from the list and handstuffing several thousands letters and licking the envelopes and stamps. They assigned each salesman a box per week to try to get the work done in time.

Curious shoppers would try to sneak early peeks, so they had to cover the windows with cardboard. And NO ONE was admitted without a letter.

From about noon to 5 p.m. on a Saturday, hundreds of people would come through, eat some homemade cookies and punch, check the prize board for their number for a grand prize (a trip “up North” somewhere, Grandpa said: “Nothing major, by today’s standards.”) and – hopefully – buy an appliance.

We still delivered for free, even then, but from the backs of pickup trucks. And we kept a delivery guy on hand to run down to the Minnesota State Fairgrounds, where we warehoused back then, to grab a Radarange. The early Amana microwave apparently was a popular gift for men to get their wives. My grandpa said we sold hundreds of them.

Those sales were considered very successful by the day’s standards, my grandpa said. But because they were one-day only, and we’re in Minnesota, the weather could virtually crush the sale. And some years it did.

“One year we had a private sale and it snowed like hell, so we had no one in the store,” my grandpa said. “Finally, a customer walked in. I looked at him and said, ‘I believe you’re next.’ “

And there are so many more where that came from…

Can you imagine this sort of thing these days?